Posted on September 17, 2013 by Leeds Libraries

Welshman Billy Boston is a true legend of Rugby League and at the time of the third World Cup in 1960 he was in his prime, selected in Great Britain’s squad despite being injured on the Saturday before it was named in a league game for Wigan against Whitehaven. He only recovered in time for the decider against Australia at Bradford, scoring the first of Britain’s two tries in typical fashion, handing off his opposite number, Brian Carlson, with his left hand and then powering to the corner.

In all he won 31 caps for Great Britain, initially being selected for the 1954 Lions tour after a mere handful of games for Wigan, scoring a record 36 tries. He scored 571 career tries in total.

Boston missed the 1954 World Cup through injury, but played in two games in the second tournament down under in 1957. On the way home, Great Britain’s 1957 World Cup squad went to South Africa without him when the apartheid laws prevented him travelling with them.

Posted on September 12, 2013 by Leeds Libraries

Auckland’s Vic and Sel Belsham are two of the select few brothers to have played for New Zealand. But that’s not why they are best remembered in the annals of Rugby League history.

Vic’s international career was short-lived, touring Australia with the 1948 Kiwis, missing out on selection in the two Tests but playing in four of the six minor games. He achieved much more in later years by becoming one of only three New Zealand international players to referee Tests and the only one to control a World Cup game. He and Australia’s Darcy Lawler were in charge during the 1957 World Cup.

Scrum half Sel Belsham made his Test debut at the age of 24 on the 1955-56 tour of Great Britain and France, toured Australia in 1956 and returned a year later for the World Cup, his last international appearance.

Twice during the World Cup, Vic Belsham refereed matches in which his brother played – New Zealand v Australia and the Rest-of-the-World v Australia.This feat is unique in international Rugby League.

Origins of Rugby League in Leeds

Posted on September 10, 2013 by Leeds Libraries 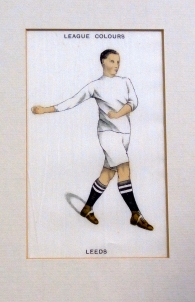 Join us on Friday 13th September for a talk by author and rugby league historian Professor Tony Collins.  The talk will give an informative insight into how the game began in Leeds and will be in the Exhibition Space, Central Library 1 – 2.30 p.m.  There will also by the opportunity to see the exhibition and talk to Bernard Shooman and Peter Benson from the Leeds Rugby Foundation Heritage project about the exhibition.

Posted on September 6, 2013 by Leeds Libraries

During the exhibition we will be highlighting some of the stories from the World Cups. Today’s story is from 1954

Following approaches from the fledgling California Rugby League Australia and New Zealand played 2 exhibition games in California on their way home from the 1954 World Cup competition. The ballyhoo before the games at Long Beach Memorial Stadium and Los Angeles Coliseum was typically American. Australian captain Clive Churchill was given the keys to the city and escorted to the arena by police with their car sirens blaring. Australia won both matches 30 – 13 and 28 – 18. The second encounter was called off early after a pea-soup fog descended on the ground and the players couldn’t find the ball after it had been kicked into touch.

About 10 minutes after the players had left the pitch, it was realised that Australian winger Des Flannery was nowhere to be seen. He was found, still in the fog, calling out for his mates.

Posted on September 5, 2013 by Leeds Libraries 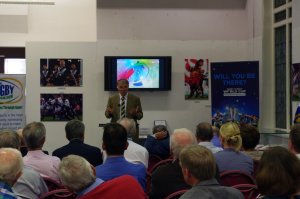 Gary Hetherington at the exhibition launch

Celebrate the Rugby League World Cup with the heritage exhibition now open in Leeds Central Library. Leeds Libraries have been working in partnership with the Leeds Rugby Foundation Heritage Project to create a fascinating exhibition. Explore the history of the Cup with memorabilia, displays and photographs. Throughout September there is also a great programme of events and activities for everyone to enjoy.

Image | Posted on September 5, 2013 by Leeds Libraries | Leave a comment